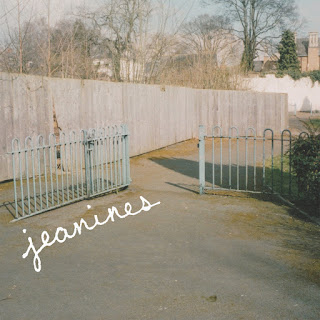 The old saying is that good things come in small packages.  Like many sayings, it is true until it isn't, which is another way of saying that you only use it when it fits.  But for this album, it fits perfectly.  The songs are brief, the band only has two members, and even the name of the band is just one word.  But on their self-titled album, Brooklyn duo Jeaninies deliver concise bundles of jangling energy that contain a positive charge well above their run time.  Frontwoman Alicia Jeanine (guitar/vocals) multi-tracks her vocals, delivering delicious harmonies, and Jed Smith (bass/drums) infuses bounce and punch.  The melodies are perfect pop sugar, and the themes are melancholic with a dose of sunshine -- delivered with a direct and sincere lyricism.

The songs on Jeanines invite references to bands in the C86 spectrum, and more broadly bands such as Television Personalities, Veronica Falls and Real Numbers and the rosters of labels such as Sarah, Cloudberry, and Slumberland, which is the proud label for this release.  And the references are many because the band adeptly covers a broad range of jangle pop styles from Heavenly to Shop Assistants (albeit without the switchblade in the pocket).  There is no doubt that this album will be among the jangle pop albums of the year.

Jeanines is out now in vinyl, digital and CD formats via Slumberland Records.