"Sometimes Accidentally" by The Goon Sax 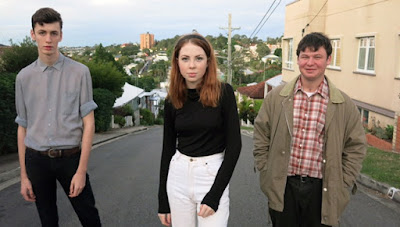 Monday mornings can be a bit rough, so it is greatly appreciated when the early emails bring treasures like the new single from The Goon Sax.  They are three high school students from Brisbane -- Louis Forster, Riley Jones and James Harrison -- and recently became the first band that Melbourne's Chapter Music signed based on an unsolicited demo.  Chapter will release the band's debut LP, Up To Anything, in 2016, but are sharing their good fortune with the single "Sometimes Accidentally".  The song is a charming little almost-love song, with vocals that will remind you of The Go-Betweens and instrumentation and melody that will remind you of The Pastels.  I think that is a smashing combination that will work on the rest of the days of the week as well.

The single is a digital release.  See links below.