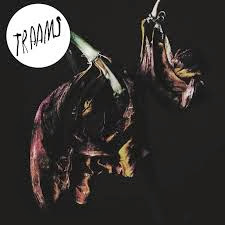 Sussex, UK-based TRAAMS and their first full length album Grin came to my attention in October 2013, right before I unfortunately went on a lengthy posting hiatus. But I've certainly been listening to this bracing album and it's one I want to share with our readers, as it's become one of my 2013 favorites.

In short, I'd characterize this record as something that is simultaneously heavy and free-spirited, giving evidence of the influences of Kraftwerk and, say, Richard Hell, with all the jazz, punk and post-rock craziness that half-assed comparison entails.

This gives you a taste of their sound and the sonic variety of their approach (like the rolling piano in "Flowers" that offsets the steady, pounding drumbeat and heavy guitars) and frontman Hopkins' sometimes snarly, sometimes haunted vocal approach. But for my money the best moments on Grin are the longer tracks, "Head Roll" and "Klaus" (a nod to a progenitor, most likely), where they really get into a groove and stretch out.

But the shorter, punk tracks are not to be missed. Here's another upbeat one, "Fibbist":

It's really a terrific record and if you somehow got through 2013 without hearing it, go fix that now.