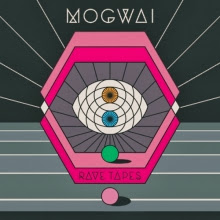 Mogwai's not wandering far from their established style on their latest studio album Rave Tapes - they offered an advance track, "Remurdered", that did change things up a bit... but the majority of this album features their slow building, eventually ferocious guitar work - the overwhelming beauty of a style of guitar rock that they do better than anyone else. There is majestic piano work, an evocative vocal chorus here and there, and a few of their usual tricks, but it's a Mogwai album, and to me, it's to be celebrated as such. Perhaps they will be criticized for not stretching or pushing the limits, but not here. To have 10 new songs of this high quality from them is an occasion to be celebrated.

Last year's soundtrack showed how well Mogwai's atmospheric approach accompanies striking visuals - of course, their videos have always shown that. Previously we shared their video for album track "The Lord is Out of Control":

That's an excellent example of the sounds here, but my favorite track is "Hexon Bogon", mainly because the guitars are strong and the pace upbeat from the beginning of the track. There's a spoken word track that juxtaposes what sounds like a radio preacher's explication of Led Zeppelin's subliminal satanic messages with a particularly beautiful instrumental - reminiscent of Come On Die Young's "Punk Rock", except that the spoken word continues throughout the track.

But it's moments like the dizzying heights reached by the guitars on tracks like "Hexon Bogon" and "Mastercard," and the majestic swell of keyboards, drums and vocal chorus on the consecutive tracks "Deesh" and "Blues Hour" that keep me coming back to Mogwai records. In that respect, this album is a success -- the latest in a long line of successful releases from them.

Fortunately, you don't need to read much from me - you can stream the album at the Guardian website now. It's out tomorrow on Sub Pop in the US, and today on the band's label Rock Action elsewhere.