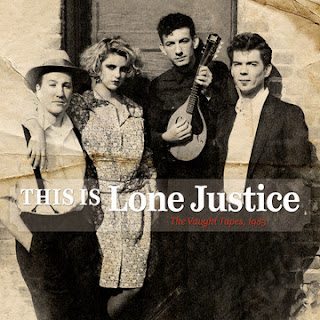 In the early 1980's, punk, rock, folk and country musicians rubbed shoulders in LA nightclubs - Los Lobos, X, Dwight Yoakam and The Blasters were playing at clubs like the Whiskey and the Palomino, and a lot of young musicians had the idea that one could love both George Jones and The Clash, both Buck Owens and The Velvet Underground. Out of this environment came Lone Justice (Maria McKee, Ryan Hedgecock, Marvin Etzioni, and Don Heffington), full participants in the alt-country movement. In the early 1980's, McKee and Hedgecock got together over a shared love of music, met up with Etzioni who was a veteran of several LA rock bands and Heffington who was a member of Emmylou Harris' Hot Band and started playing together. In 1983, Etzioni met David Vaught, and the group went to Suite 16 Studios and laid down much of the set list they had been playing live. From that session comes This Is Lone Justice: The Vaught Tapes, 1983.

Recorded direct to two-track tape with no overdubs, those 12 tracks are finally available to the public. Nine of the tracks are previously unissued, and include originals as well as the covers they made their own in concert - namely a knockout version of Johnny and June's "Jackson" where McKee's and Hedgecock's vocals crackle and snarl as they ought to on that song.

Though McKee and Hedgecock's vision didn't meet with chart success, they made some of the most memorable music of the stuff that would come to be known as "cowpunk" and shared the stage or inspired some of the favorites of the later No Depression movement. This lineup of the band dispersed in 1985, not long after the Geffen debut was released. But they never sounded better than this. This is the band that knitted together the sounds of X and The Maddox Brothers and Rose - a high-energy rockabilly variant with a completely irrepressible lead singer and a lightning-fast lead guitarist.

Highlights include "Working Man's Blues", "Nothing Can Stop My Loving You" and the aforementioned "Jackson" - covers where McKee's reverence for the originals does not stop her from ripping through them as thought to make them her own. But her originals fit right in: "Soap, Soup and Salvation" based on her experience at the rescue mission with her Baptist parents (as well as her research into the Depression era) are of a piece with the better-known covers.

The album is out this week (Jan. 14) on Omnivore Recordings. Liner notes contain tributes to Vaught, who passed earlier in 2013, as well as reminiscences from band members and a nice endorsement from Dolly Parton, who fondly recalls seeing them live in 1983.

I can't resist mentioning that Maria McKee is the half-sister of Bryan MacLean, of the fantastic 60's band Love. The dude wrote 'Alone Again Or'! http://en.wikipedia.org/wiki/Alone_Again_Or_(song)