The Solvents - The World Is Not A Vampire: Lost, Demos, Outtakes, Unheard 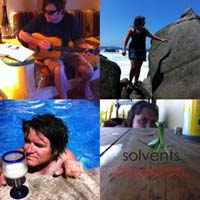 First heard of The Solvents, a duo from Port Townshend, WA, early last year and was captivated by the wistful, sweet sound of Forgive Yr. Blood. The Solvents are Jarrod Bramson and Emily Madden, and I'm glad to announce two things: First, they've just released an album of outtakes - The World Is Not A Vampire: Lost, Demos, Outtakes, Unheard; and second, a full album is due out later this summer.

You know how it is when a band you like releases an album of outtakes and demos - this is no different. I find this band utterly charming in nearly every way, from the wistful vocals to the strings that back the acoustic or electric guitars, and of course, the quality of the songs with their slightly off-kilter titles.

It's released as a name-your-price download via MASA Records, the compilation donates all proceeds to KPTZ, a new community radio station in Port Townsend at which Bramson is a DJ.