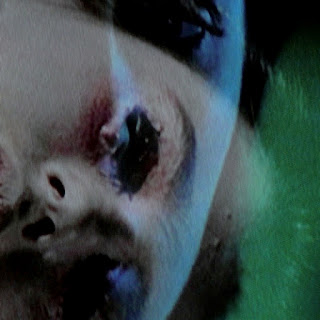 If you can get past the band name - which Hardy had some interesting thoughts on recently - you will discover some terrific rock music. I think the name has a pretty simple origin: somebody (perhaps a talent scout) heard Paul Saulnier play the guitar and yelled out "PS I love you on lead guitar!" Since that's too long for a band name, they shortened it.

Because the dude can play guitar. Last year, I posted a video of "Facelove", a song I heard on a podcast, and immediately went and found their previous album Meet Me At The Muster Station. I've been enjoying it - a really dense, immediate album full of good indie rock elements - and looking forward to their followup ever since.

Death Dreams ups the ante somewhat, and finds me searching for comparison points - do the guitars remind me of The Smiths? Yes, in places, but The Cure in others... and Television sometimes - but heavier than any of those in most places. "Sentimental Dishes" (video below) features a blistering lead, and is a good example of the kinds of sounds Saulnier is getting out of his guitar.

The vocals definitely remind me of the Tom Verlaine/Richard Hell (and going back a ways, Todd Rundgren) school of "haunted/nervous guy punk" vocals, and if you know what I'm talking about you know that vocals like that really require a strong lead guitar. And you know that punk-influenced bands do best when driven by a really strong drummer. PS I Love You features both - Saulnier on lead guitar and Benjamin Nelson on drums.

"Driving" is a decent descriptor. Some of the song titles, featuring place names ("Toronto", "Saskatoon", "Princess Towers") are indicative of an album perhaps written on the road. But more to the point, this is excellent driving music... the way Swervedriver, Dinosaur Jr. and Son Volt are great driving music.


Death Dreams is out this week. If you like guitar rock of any variety, but especially heavy guitar rock, don't hesitate.