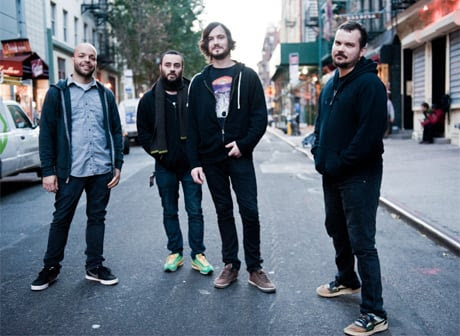 How loud will your stereo go?  I learned today that mine's not nearly loud enough, and it's pretty much bothering the hell out of me. Here's the song that was on when I found this out:

This is the second track off of Harmonicraft, the new album by Miami's Torche, which was released last week on Volcom Entertainment, and it's my early favorite for song of the year.  It's great at normal levels, but it insists on being played at a volume that will give headaches to people the next zip code over. I'm thinking along these lines: 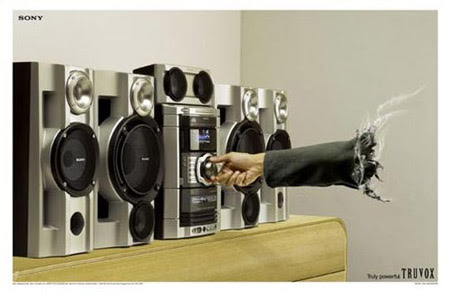 Torche defy any sort of easy genrefication. Metal? Yeah, no question there, but do you remember how folks used to call Blue Oyster Cult metal when they didn't sound a thing like Black Sabbath or Judas Priest?  And they even had that whole satanic thing going. Is Torche satanic? Well, not unless rainbows are satanic. The band apparently has called their music Doom Pop, and that's certainly helpful. But if we were to revert to a good old-fashioned hybridization, a cheap device we never do here at WYMA, I'd think Melvins crossed with Ted Leo would pretty much hit the nail on the head. There's a whole ton of melodic pop goodness here.

This album is something special indeed. Tracks of bar chords on top of other tracks of bar chords make me extremely happy, but there's a good deal more happening with the two-guitar attack of frontman Steve Brooks and new band member Andrew Elstner. It seems like there's more lead, but fewer solos than in the past, if that makes sense. Here's a great example of what I'm trying to get at:

As good as the guitars are, after a couple of listens I began to sense the propulsive energy of Rick Smith's drums and Jonathan Nunez on bass. It's easy to witness when you see the band live, but thanks to skilled production (and engineering by Converge guitarist Kurt Ballou -- recently mentioned in these pages) these guys are heard at the forefront of several songs, most notable to me being "Skin Moth", for which I couldn't find a good link.  They're not exactly in the background of this scorcher either:

And for you folks who frequent this place because John named it for a Guided by Voices song, well, Torche earned their WYMA bona fides last year by way of their split 12" with South London noise collective Part Chimp. The three songs contributed by Torche all were covers of old-school GbV deep tracks, including "Unleashed! The Large Hearted Boy."

While selling me a t-shirt at their last show in Raleigh on their tour with Corrosion of Conformity and Valient Thorr, Rick said he thought these three songs are now available for legal download. I'll be damned if I can find them, but I'll update with information if I'm able to figure out in which corner of the internets they are hidden. I'll see them again at Local 506 in Chapel Hill this Thursday, 5/10, so maybe check back Friday afternoon.

In the meantime, do yourself and your loved ones a huge favor and buy yourself a fat ass stereo, and then blow out its speakers with this fantastic new album.