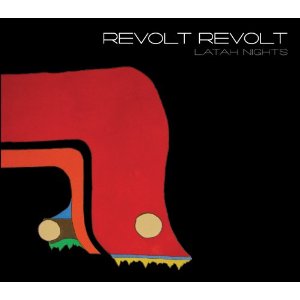 Revolt Revolt is a Boise- and Seattle-based guitar rock band - heavy emphasis on the guitars, but with a strong rhythm and some fairly prog-leaning bass lines... In fact, while I think they are closest in sound and approach to Built to Spill, I definitely get the comparison to Dinosaur Jr., Sebadoh and Guided by Voices, and in places I hear echoes of Jane's Addiction. But the guitars predominate, and that's just fine with me.

Revolt Revolt has released its second album Latah Nights, on the heels of a recent tour with Built to Spill, and this is definitely recommended to anyone who's a fan of BTS's sprawling guitar rock. 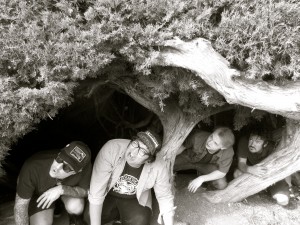 Lead singer Chris Bock has fronted the band since it first formed in 2007, but some of the members on this record are different from their debut album Chordata. This time around, it's Bock and Ben Brunn (original members), joined by drummer Ben Wieland of Jumping Sharks, and guitarist Ralph Mugot of Hungry for More.

Here is the video for lead track "Flares" off the new album Latah Nights:

This album is really a scorcher. Even when they stretch out on songs like the 4:56 "Gold" or the 5:16 "Hell Has Its Roads", there is no letting up on the excellent lead guitar work. Some of the songs are a little softer - "Sattelite" for example, is at a slower tempo and a little more acoustic-guitar based. But even on that one, there's plenty of guitar feedback.

Overall, Bock's vocals are a good counterpoint to the sometimes-meandering, sometimes-raging guitar leads. He's in the Neil Young/Doug Martsch area for the most part - higher register, really well-integrated with the band's overall sound.

Here's a video for an older song, "Golden Age":

This is an exciting band - to have undertaken a 43-city tour with Built to Spill with one album under its belt and a revolving membership, and then to have recorded an album as strong as Latah Nights portends very good things for their future.

The record was released August 21 on Spark And Shine Records.

Todd Sprague is the drummer on this recording.