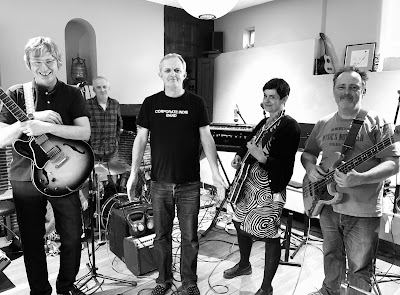 Time for another track from the upcoming album by Swansea Sound. "Rock and Roll Void" has the right amount of rocking and the right amount of smart, self-depreciation. It reflects the band's perception that pandemic lockdowns demand social-political punk rock. And who is to say they are wrong?

Swansea Sound is comprised of Hue Williams, Ian Button, Rob Pursey, and Amelia Fletcher. The album is titled Live at the Rum Puncheon, which name-checks a long demolished Swansea pub, and will be released on November 19. A few additional notes about the album release are in order, because it will not be available via streaming services. The primary label is the band's own Skep Wax, for vinyl, CD, and Bandcamp downloads. Lavender Sweep will handle UK/Euro cassette. In North America, HHBTM will have vinyl and CD, while Austin Town Hall will have the cassette. Indonesian label Shiny Happy Records will have cassettes, and Japanese label Hayabusa Landings will have the CD.