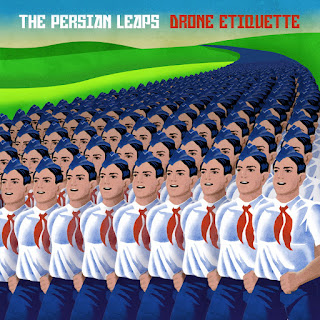 Minnesota musician Drew Forsberg named his band The Persian Leaps after an ancient architectural feature. But the foundations of his music are power pop and upper midwest indie rock. Like many artists, at least based on the great music we have heard this year, COVID shutdowns have made for some productive musical creation. But also due to the pandemic, Drew was unable to assemble a band of fellow travelers to record the new songs. However, six of them did get recorded with Drew filling multiple roles, and we have the spanking new Drone Etiquette to get us through the autumn months. Not that it ever takes any persuasion for us to cover a record by The Persian Leaps, but this EP is truly welcome. It avoids the COVID mope and anxious introspection of some pandemic music, blasting off on the indie rock side of the spectrum with the crunch, buzz and fuzz of "When This Gets Out" followed by the similarly hard-driving "Angel Complete". But fans of the more pop-side of the Leaps are not shortchanged as the following tracks balance the ledger with some chiming and jangling guitars and more relaxed tempos. As a songwriter, Drew doesn't shy away from telling us what's on his mind, but he is ever mindful that he is an entertainer and a rocker and he delivers accordingly.

Drone Etiquette is out now via Drew's Land Ski Records.