The No Ones - The Great Lost No Ones Album 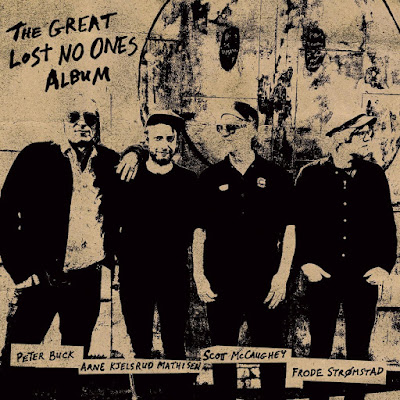 It seems appropriate to us to follow up a nearly two day period with no new posts by featuring a band named The No Ones. It would tweak our sense of humor to say we picked the band solely because of the name, but that would not be true. You see, this band is comprised of Peter Buck (R.E.M., the Minus 5, and others), Scott McCaughey (Young Fresh Fellows, the Minus 5, and others), Frode Stromstad (I Was A King), and Arne Kjelsrud Mathisen (I Was A King). Without searching the archives, we are confident that this is our first featured band with two members in Portland, Oregon and two members in Norway. As I'm sure you will expect, their recently-released The Great Lost No Ones Album is packed with satisfying guitar pop that should ease the pain of having no live shows to attend. The album was recorded in 2017, but took some time getting to the light of day. No matter, it has arrived and it sounds wonderful!

The album is out is vinyl, CD and digital formats via Yep Roc Records