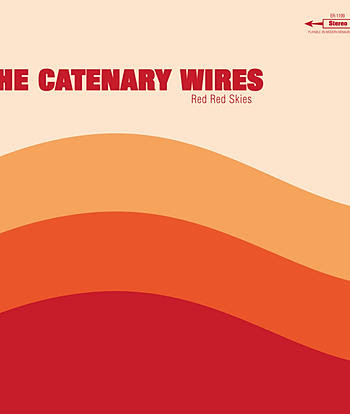 Sometimes heartbreak, disappointments and crumbling relationships can sound beautiful.  Well, maybe not if you are one on the participants.  But if you aren't, it can be grist for a beautiful set of music, as it is for Red Red Skies, the new album from The Catenary Wires.  The band consists of duo Amelia Fletcher and Rob Pursey, partners off the stage as well, who have worked together for decades in Talulah Gosh, Heavenly, Marine Research and Tender Trap.  Playing all of the instruments themselves and shedding the jangling electric guitars and pace of some of their earlier work for gentler tunes infused with quiet emotion, and a bit of humor, they have crafted a debut album of intense, melancholy beauty with a few dashes of impish pop joy.

Instrumentation includes guitars, keys, and bells, but the stars of the show are the vocals -- Amelia's fragile but clear highs and Rob's best Calvin Johnson croon.  Their differences blend well and give depth to the quality of their songwriting, as ably demonstrated on album opener "Intravenous" (stream below).  Other standout tracks include "When You Walk Away" and "Throw Another Love Song On The Fire" (see video version below).  The latter focuses on heartbreak, but in a way that pokes fun at songs about heartbreak.  I don't know whether that makes it a happy song or a sad song.  Maybe it is a happy sad song, but it is in any case a very good song and gives Rob a nice showcase for his vocals.  There is a lot to like in this mini album, and there is a lot of promise in the comfortable intensity of Amelia and Rob as a performing partnership.  I hope that this is just the beginning for The Catenary Wires.

Red Red Skies is out this week on Elefant Records in Europe and Matinee Recordings in North America.