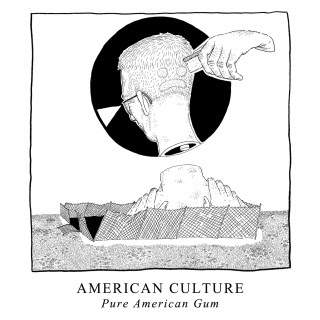 The music of American Culture wears its American rock credentials proudly.  Think The Replacements, The Henry Clay People, Springsteen, Velvet Underground, Dinosaur Jr and Guided By Voices.  It may not be easy to articulate the American essence, but we grew up on this stuff, bought records and went to shows.  This is our rock music -- the soundtrack of our lives. And while the fusion of punk, power pop, college rock and guitar pop with a love of volume and 'we do what we want' attitude is never going to be destined for the pop charts of 2015, it also is always going to have a place in our hearts.  The band is either shy about, or unconcerned with, telling you anything about themselves, although my crack research assistants generously took time from filling out their March Madness Brackets to advise me that the main man here is Chris Adolf who formerly performed as Bad Weather California.  Due to said interns' indolence, as well as their not quite admirable resilience in the face of negative job reviews, no other details will be forthcoming.

Thanks to the good folks at Jigsaw Records, we all can have a piece of American Culture.  Pure American Gum delivers ten anthems reflecting the freedom and anxiety of American youth.  The album kicks off with the '90s rock of "My Teeth Are Sharp", with woozy vocals and thick guitar lines.  "Actual Alien" brings a touch of shoegaze without yielding any of the fist-pumping drive.  Fans of the late The Henry Clay People, which certainly includes me, should find great joy in "Social Anxiety".   The next song is titled "I Like American Culture".  For my money, it is the best song on the album, and by now I expect any rock fan will agree with the sentiment in the title.  "We Wanna Go To The Movies" sounds like it should be the best Guided by Voices song of the year, and just as you are wrapping your head around that fact the band slides into the Springsteen-like romp of "Just Driving Around".  The following "I Wanna Be Your Animal" switches the vibe to a taut film noir soundtrack.  The upbeat piano-driven "And That's Enough For Me" becomes one of the standout tunes of the album by virtue of making you feel so damn good.  The album ends with the adrenaline rush of "About A Friend" and the delightful "I Wasn't Going To Fuck You Over Like That".

This album wraps up years of American rock music with its own fresh wrapper.  I love this album and can't stop playing it.

Pure American Gum is available as a digital download for the unbelievable price of $7, and on vinyl with a digital download included.  See the Bandcamp link below for either format.  Gum is not included, but at those prices you'll be able to afford the flavor of your choice.