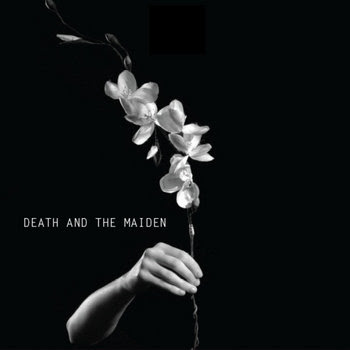 When we featured the Temporary compilation from New Zealand's Fishrider records (link) last August one of the four songs I chose to highlight was "Flowers For The Blind" from Death & The Maiden.  With haunting vocals dancing over a slinky groove, it was a song that promised much from this Dunedin trio.  Seven months later, the band has delivered on that promise with their self-titled album.  Over its seven tracks, the band creates a soundscape of synths, reverbed and delayed guitars, mechanical drums and crisp bass, crafted with plenty of space around the notes and then chilled to icy perfection.  My favorite tracks are "Flowers For The Blind" (really, one of my favorite tracks of the year), "Civilization", and "Dear ____".

But the true effect of the music isn't derived from individual songs, but rather from the adept combination of languid melodies, melancholy but detached vocals and sharp beats spread in various combinations over the approximately 38 minutes of the album.  It is hard to explain, but Death And The Maiden fills that inner need for a little darkness.  It is satisfying and addicting.  The "replay" button will be your friend.

Death and the Maiden are Danny Brady (synths/programming), Hope Robertson (guitar/drums/vocals), and Lucinda King (vocals/bass).  The album is out now on vinyl, CD and digital via Fishrider Records, and you can grab your favorite format via the Bandcamp link below.  Eventually it is to be available via Occultation in the UK and Midheaven in the US.