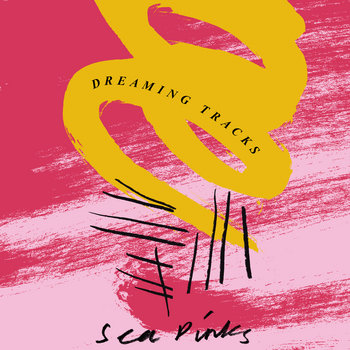 I cannot predict where I will find one of my favorite albums of the year.  Sometimes it is an eagerly anticipated release from a long favorite band.  Sometimes it is a new and exciting talent that hits the scene to broad critical acclaim.  And sometimes, as it the case with Dreaming Tracks, it is an album from a solo-project-turned-full-band.  Neil Brogan has been the drummer for Belfast's Girls Names.  But it turns out that Neil also has a way with the guitar, a knack for songwriting and some things he wants to express.  Of course, none of this is a complete secret, as he has prior Sea Pinks releases to his credit, including the fine Freak Waves of several years ago.  However, to my ears Dreaming Tracks represents a clear step up in writing, scope of expression, performance, and I dare say, ambition.

From the initial cello notes of the opening track "Dream Happening" (radio edit below without the cello opening), to the buoyant indie rock of "Art Imitating Life", to the hints of sophisticated '60 guitar pop of "Meat & Drink", to the taut, driving "Waiting for You (to Go)", to the 'big room' alternative rock psychedelia of "Magpies Eyes", to the dusty country rock of "Not Belonging" and "Wasted On You", Neil and his compatriots demonstrate a complete mastery of songs and and astutely blended styles. The guitar tones in particular are an absolute highlight: Resonant, gut-thumping chords; snaking leads; and authoritative bass.  Those who fell in love with Sea Pinks will find less fuzz and even a little less jangle than some prior recordings, but the trade off is a more mature expression of indie rock that should place this Belfast, Northern Ireland project alongside Allah Las in the conversation regarding the best current bands playing West Coast guitar rock.  If you only have time for one example to evaluate the truth of that statement, check out "Pacific Standard Time" below.

Writing about current music means I live with an album for some weeks, listening multiple times, writing up the album, and then moving on.  Time is short, so it is the rare album that continues to get regular play after I publish the post.  But Dreaming Tracks is one of those rare albums.  In fact, if writing about it meant I couldn't listen to it any more, you wouldn't be reading this because I'd still be "evaluating" the record.  Their Facebook page offers that the band is inspired by sea glass, bleached grass and ghost guitars.  I don't claim to know what that means, but paraphrasing Abe Lincoln addressing the issue of General Grant's excessive consumption of whiskey, if sea glass, bleached grass and ghost guitars inspire music like Dreaming Tracks, sent a shipment to all of the bands.

You can stream the entire album at the Bandcamp link below.


In addition to Brogan (guitar and vocals), Sea Pinks on this album are Davey Agnew (drums), Steven Henry (bass), Jonny Agnew (cello on six tracks).  Dreaming Tracks is available via CF Records, a small label in Belfast with a tasteful roster.  You can purchase a digital download or physical via the Bandcamp link as well.

Love this! Thank you for sharing!