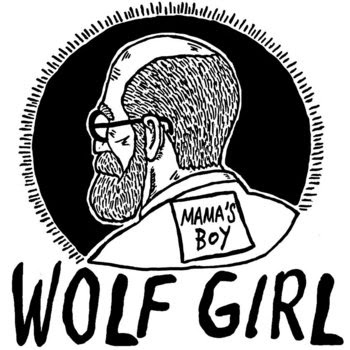 May I introduce Wolf Girl, a South London four-piece consisting of Chris, Carl, Becky, and Christabel?  They make incredibly infectious garage pop with male/female vocals, high energy, and wit.  There are jagged edges, and maybe even some jagged hearts, but the doo wop choruses hook you in and the vein of sugar binds it all together.  Their art is getting an official physical release via the cassette version of the five-track Mama's Boy EP.  Opener "Good For Nothing" and the following "Freudian Slips are racing twee at a punk pace.  "I Will Be" is a very sweet '60s-style nugget.  Rocking out in garage mode is the game plan for "Hear In Your Head".  The record's closing song, "Sampson", is the only song to break the two minute mark, and the only one that doesn't race at full speed.  But while all the tracks are good, "Sampson" also is the track that one might point to in predicting that Wolf Girl is a band that will have much to offer us in the future.

The Mama's Boy cassettes will be available from Soft Power Records.  Although the release date is November 17, the release is limited to 100 copies, and a record this good is likely to be snapped up in the pre-order stage.  Buy yourself a copy, wrap it in Christmas paper with your name on it, and sign "a secret admirer".