The Lucksmiths - Why That Doesn't Surprise Me (20th anniversary edition) 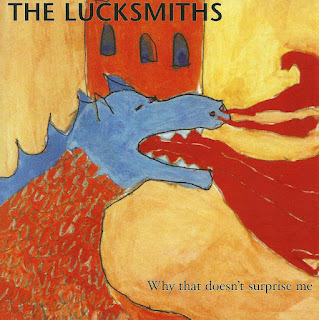 We don't mean to be judgmental, but if you are here you are likely to be an indie pop fan. And if you are an indie pop fan Australian guitar pop heroes The Lucksmiths are known to you. You probably also know that the group is no loner active. But like all artists that make good music the band lives on through their songs and Matinee Recordings is giving them extended life via  the 20th anniversary release of The Lucksmiths' seminal 2001 album Why That Doesn't Surprise Me. The album was the fifth by the trio of Marty Donald, Tali White, and Mark Monnone, but it marked their first use of a professional studio and producer. The choice not only led to higher production values but also a expanded sonic textures.

The release is available in CD and vinyl formats via Matinee Recordings and Lost and Lonesome Recording Company in Australia.

Matinée Recordings · The Lucksmiths - Why That Doesn't Surprise Me

I really hope they get around to doing reissues of the last couple of albums. I like this one, but i will wear out a copy of First Frost or Warmer Corners.