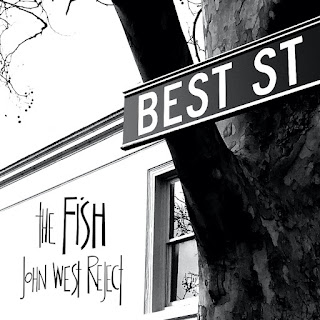 It may just be that the best EP we hear this month is by a bunch of rejects -- specifically, The Fish John West Reject. The record is the five-track Best Street. The band was formed in Tasmania in the '80s and later relocated to Melbourne. They formerly were known as The Dunaways, but later acquired their current idiosyncratic but memorable moniker.  A versatile band, they are known for power pop and jangle pop.

Best Street is a delightful representation of their talents. Opener "Southwesterly" is an jangle pop gem in true Australian style. The following "Elwick Drive-In" is a power pop standout. The following three songs display the band's ability to rock with style.

The players on the EP are Mark Narkowicz (vocals/guitar), Andrew Viney (vocals/bass), Graham Rankin (drums), Harvey Saward (acoustic guitar/keys), Ted Lethborg (guitar). The songs were written by Narkowicz, Rankin, Viney and M.D. Witheford. Unfortunately, Witheford has passed away and the EP is dedicated to his memory.

The Fish John West Reject has self-released Best Street, so Bandcamp may be your best source.