Stars On Fire - Songs For The Summer 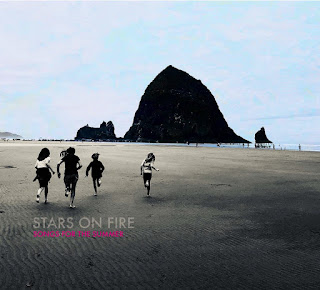 One of the fine debut EPs we have heard this year is Blue Skies Above by Stars On Fire (link to our feature). The man behind the flaming night ski is Seoul-based Christopher Mark, a transplanted Californian. We were thinking of him this week because we noted that he mentioned us in a tweet. When we woke up this morning the first thing on our mind is that his tweet referenced a new record. OK, we may be slow, but we aren't complete idiots. Having finally pieced together that Christopher was letting us know about a new release, we hunted Songs For The Summer down this morning, and now present it to our readers.

Beginning with the shoegazey "I Need Nobody (that's you)", followed by the bright dream pop of standout track "Salty Kiss", this EP delivers on its title -- reminding us of the summer now gone. We have fond memories, melancholy, and a few regrets. The EP is completed by the instrumental shoegaze of "Summertime" and the delicious, jangling fuzz pop song "Late" (which has a nice Pains Of Being Pure At Heart vibe). Here is the audio for your summer scrapbook.