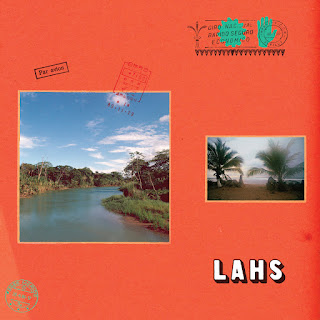 If you had a magic lantern marked "L.A." you could rub it any time you needed or wanted and be bathed in sunshine, massaged by ocean breezes, and surrounded by sand and palm trees. Toss in some outdoor cafes, pan-pacific fusion taco trucks and some music clubs, and you have the perfect getaway from wherever you live that isn't Los Angeles. But if you are like us, you either don't have such a magic lantern, or you have accessed the genie too many times and he won't respond any more. Sad as that may be, we have a hack for you. Buy yourself a copy of LAHS, the new album by Los Angeles four-piece Allah-Lahs, and you can have Los Angeles any time you want, and as many times as you need.

Admittedly, we have little editorial detachment with respect to Allah-Las. For us, they are the shamans of SoCal psychedelic pop, the high priests of the LA vibe. But even with that disclaimer, we feel confident in writing that LAHS captures the magic, the glitter and the grit of Los Angeles in a way that no other band has, and them looks at the rest of the wide world through the same lens. It is their best work to date, and a thoroughly delightful album..

Allah Las are Matt Correia, Spencer Dunham, Miles Michaud, and Pedrum Siadatian. LAHS is available today, October 11, via Mexican Summer.  The band will be touring in support of the album beginning in November.  See the dates and venues at the bottom of the post.