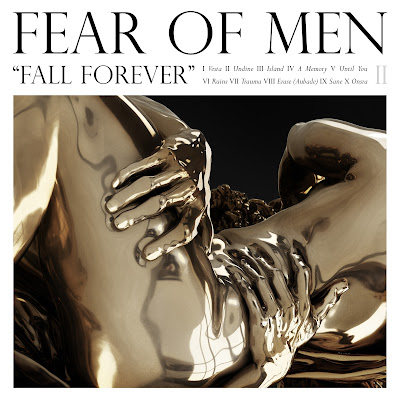 We first featured Brighton's Fear of Men here in 2011, and it has been a pleasure to watch the band develop since then.  The recently released Fall Forever is their second LP, following several singles, EPs and an album compiling several of those shorter releases.  The band was, and is, intensely melodic.  The defining characteristic in the band's sound remains the pristine tone and melancholic delivery of Jess Weiss's vocals, but the growth of the band features increased use of electronic instrumentation to feature the previously more lo-fi guitar pop set up.  The sound is denser, although the strong melodies allow manage to give the album a sense of space and breadth.  However, the real triumph in Fall Forever is not the adept and more fulsome instrumentation, or the band's obvious comfort in its own skin and mutual trust of each other's instinct to experiment, although both are impressive.  The triumph is that lyrically Fear Of Men may now be the perfect dark pop band.  The songs reveal exposed nerves, regrets, anxieties, failures, disappointments, fears, and injuries -- and all in a direct, vivid manner with concise but clever songwriting.  The delivery eschews showy emotions or pleas for sympathy, and thus, Weiss' trauma becomes more universal and accessible.

Fall Forever is out now via Kanine Records in digital, CD and vinyl formats.  Fear of Men are touring in North America until late July, and then in Europe into September.