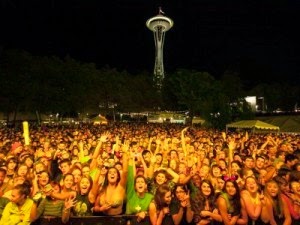 First a few words on Bumbershoot itself. Now four decades in, held over Labor Day weekend on the grounds of Seattle Center, this festival is well worth a trip to one of America's finest cities. Four high quality music stages, easy to get around, plus indoor venues for comedy shows, as well as art and various miscellaneous entertainment including family-friendly offerings. And without camping, the chucklehead factor is low as music fests go. And you see a wide variety of ages, parents with kids, aging rockers, hordes of high schoolers, urban hipsters, everything. They don't oversell the number of tickets and thus provide a high quality user experience. Plus the grounds are permanent and set up for crowds so there are actual and plentiful bathrooms, water fountains, plazas, gardens etc. My only possible complaint is the food, which is adequate but not what a foodie, NW farm-to-table city is capable of, though I suspect the Bumbershoot organizers have to take the permanent vendors and have no control of this facet.

Okay, on to the 'Mats. First let's be clear -- I love the Replacements, worship their catalogue, saw them dozens of times in their prime.  I didn't think they'd reunite or I'd ever see them again, so to say I was primed for this show would be an understatement. But reunion shows are treacherous, especially with just 2 of 4 members still active, though when you're talking about Paul Westerberg and Tommy Stinson, that half is still quite tantalizing. Plus, this is the Replacements after all, so a messy train wreck is always possible.

But they were fantastic. Tight enough to be musically satisfying, lovably sloppy enough to still be a genuine Replacements experience, complete with dropped microphones, flubbed lyrics, and impromptu covers (Chuck Berry's "Maybelline" (22 seconds of which is captured here) , local boy Jimi Hendrix' "Third Stone From the Sun" and the Jackson Fives' "I Want You Back").

Westerberg's voice was terrific. Tommy is still the irascible punk ("We don't do good playing in the daylight; we're a bar band"). While their self-depreciative underdog personality is intact, they now have a command on the power and depth of their remarkable catalogue. The set was particularly well paced.  Example: Stadium rock "Valentine" followed by crowd pleasing country-flavored singalong "Waitress in the Sky", then right into the punk speed burner "Tommy Gets His Tonsils Out".  Who other than the 'Mats can pull that off with such ease? If you didn't know better, you might call these guys savvy, mature pros. I wouldn't have either expected or changed a thing about this varied set list, chock full of surprises, the hits, and a lot of the early punkish Twin Tone material:

Favorite Thing
Takin a Ride
I'm in Trouble
Don't Ask Why
I'll Be You
Valentine
Waitress in the Sky
Tommy Gets His Tonsils Out / Third Stone From the Sun
Take Me Down to the Hospital
I Want You Back
Nowhere Is My Home
Color Me Impressed
Achin' To Be
Kiss Me on the Bus
Androgynous
I Will Dare
Love You in the Fall (Westerberg solo song)
White and Lazy
Love You Till Friday/Maybellene
Can't Hardly Wait
Bastards of Young
Encore:
Left Of The Dial
Alex Chilton


The band now includes drummer Josh Freese (The Vandals, Devo etc.) who was rock steady all night, and guitarist Dave Minehan replacing Slim Dunlap who suffered a very serious stroke. Minehan has played in Westerberg's solo band and was very comfortable in his role, muscular and inventive, and most importantly, tackling the old songs with Bob Stinson abandon and replicating Bob's sound.  Replacing Bob was a tall order and I always respected Dunlap wanting to be his own guy stylistically.  But it was damn good to hear Minehan ripping it up on an old chesnut like "Take Me Down To the Hospital".

I was struck by the size, varied age and devotion of the crowd, many of whom from my anecdotal contact with a sampling, seemed like me to have traveled quite a distance to see their heroes once again. I was tickled to see the teenage couple next to me singing along to every word of "Androgynous".

Nothing much has been posted from Bumbershoot yet, but here's a very recent video with decent sound quality that gives you a good idea of what it was like Sunday night. "Takin a Ride":

And when the 'Mats unleashed their heavy artillery to close the show with the "hits" -- "Can't Hardly Wait", "Bastards of Young", "Left of the Dial" and "Alex Chilton" -- you realize why some like me consider them one of the very best rock'n'roll bands of all time. Our older brothers were back at home with their Beatles and their Stones, but we had the scrappy Replacements, who knew exactly what it meant to feel like an outsider at school, how disappointing growing up could be, and how much we adored the radio hits we all grew up on, never too cool to actually love "I Want You Back".

We'll leave you with a fun recent live recording of "Left of the Dial", one of my favorite songs of all time, giving you a sense of exactly the experience I had Sunday --  Tommy cracking wise, the crowd singing, the mighty Replacements ripping it up:

Great set list. I could have looked at their last few shows' set lists, but I wanted to be surprised. I noticed the guitar player replicated a few of Bob's licks too. That was really awesome.

I only got to see them once; I think it was '91. It was a decent show but you could tell they weren't happy. Never would have thought over 20 years later I'd get to see an even better show.

Mikemos, thanks for reading and commenting. Much appreciated. I also saw them in 1991, and this energy was much better - relaxed , fun, really into it.

You're so cool! I don't think I've read anything like this before. So good to find somebody with some original thoughts on this subject. Thanks for starting this up.Cotizar Seguro de Auto