REVIEW: Mike Cooley - The Fool On Every Corner 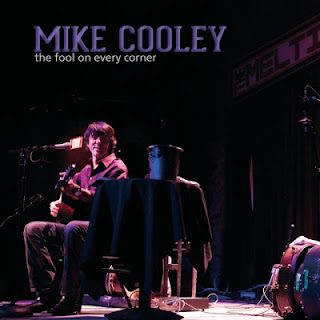 In a way, it's nice to have an album from a member of the Truckers extended family that isn't their usual Life-Changing Event. Mike Cooley's new live disc, The Fool On Every Corner, is anything but that - it's a good time, but rather than hollowing you out, it kind of makes you smile. It's well-played, well-sung, and above all, fun.

First of all, Cooley's a terrific acoustic guitar player - and most of the music on here is finger-picked. In addition to the overall high level of the playing on this record, there is some really pretty, almost delicate playing on some of the songs - check out the intro to "Loaded Gun In The Closet".

Second of all, he's (as you already know if you're familiar with the Truckers) a very entertaining country vocalist. Examples on this disc abound - "Marry Me", "Three Dimes Down" (including a detour where Cooley has a little fun with that song's similarity to the Bob Seger standard "Rock And Roll Never Forgets") and a cover of "Behind Closed Doors", just to name a few.

But third, and to me a reason I'd keep coming back to this record, Cooley's a pretty engaging guy. Funny, bright and quick on his feet, he peppers the concert with well-placed commentary as well as responses to audience shout-outs. Describing his trepidation at facing an audience alone, with nothing between him and them but an acoustic guitar and a mike: “When you don’t do it normally, it’s terrifying. I try to relax, but I’ll probably never be able to sit down in a chair on stage as easily as I sit down on a toilet behind a closed door. That’s the goal—somewhere in between,” he deadpans. “I set the bar high.”

The songs that make up The Fool On Every Corner were recorded by longtime Drive-By Truckers’ producer David Barbe during a three-show run last March, beginning with a two-night stand at The Earl in Atlanta and closing at The Melting Point in Athens. In addition to the songs mentioned above and some DBT favorites like "Carl Perkins' Cadillac", there's a new song: "Drinking Coke and Eating Ice".

Self-deprecating, talented and funny, Cooley has added a very enjoyable chapter to the growing legend of the Drive-By Truckers... he'll be on tour, solo acoustic, in 2013. I'd recommend catching him if you get the chance.