Graham Parker has worked steadily since his heyday in the late 1970's, and made some great records along the way (e.g. The Mona Lisa's Sister; Struck By Lightning). But the work he did with his original band the Rumour from 1976-1980 remains among the best of that era - soulful rock with pointed lyrics, big pop hooks and real passion. Comparisons to Bruce Springsteen were frequent and well deserved.  Despite enthusiastic press support and a devoted following, he never quite broke big in the US, perhaps too much the angry British young man for the mainstream Springsteen or Tom Petty crowd, yet far too musical and literate to ride with the punk bands.

Graham Parker and the Rumour then: 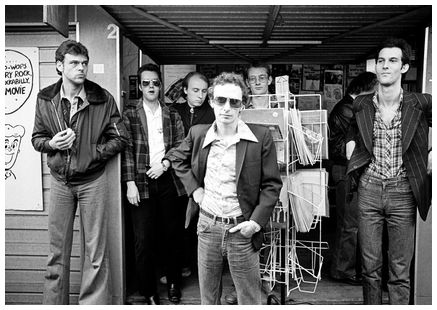 Graham Parker and the Rumour now:

So it is very welcome news that after 31 years apart, Parker has reunited with the Rumour to release Three Chords Good. All original members are on board: guitarists Brinsley Schwartz and Martin Belmont, Andrew Bodnar on bass, keyboardist Bob Andrews, and Steve Goulding on drums. And I'll be damned if they haven't missed a beat. From the reggae influenced first track "Snake Oil Capital of the World" on through, it's a whipsmart, highly skilled set of performances by as good a rock band as there ever was.

Dig this title track, where they lock into a groove and ride it:

You can stream all of Three Chords Good here. It's got it all - bristling rock'n'roll, Motown flavored pop songs, socio-political rants, beautiful melodies, killer melodies.

Graham Parker resides in rock's top tier with his contemporaries Springsteen and Elvis Costello, and his heroes Van Morrison and Bob Dylan.  And Three Chords Good is a very welcome addition to his legend.

A bonus from the way back machine, one of my all time favorite songs:

Awesome! I'm glad you guys reviewed this. Wasn't sure if this blog focused mainly on new artists.

GP and the Rumour are playing in my area on Friday night. I saw GP last year with his backing band, the Figgs, and he was phenomenal.

I will have to check out 3 Chords Good-- there's still time to make my best of 2012 list (alongside King Tuff, Ravens & Chimes, Divine Fits, Apache Dropout, Jason Lytle, etc.)