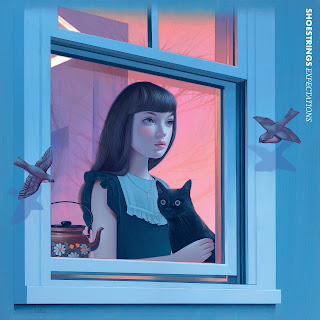 Shoestrings released Wishing On Planes in the '90s, offering listeners delicate and dreamy indie pop such as the music from the Sarah Records stable of artists. But within a few years the duo of Mario and Rose Suau conjured a disappearing act as a performing band and concentrated on production related activities. However, in the middle of the last decade, working with Swedish synth pop legend Johan Angergard prompted the revival of Shoestrings.  The result is their sophomore album, Expectations.

The new album is infused with all of the charm of their first album, but also benefits from their immersion in the Nordic pop world. The production is detailed but not cluttered, the vocals nuanced and well up in the mix, and the arrangements are far more adventurous than standard indie pop. Expectations is a delightful and rewarding listen, and we think it will make the end of your weekend a littler warmer and brighter. We can only hope that Mario and Rose don't wait several decades before the next album.