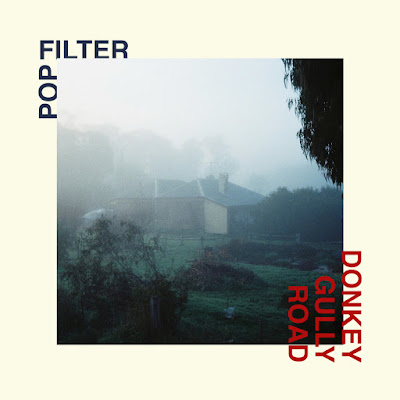 Is Donkey Gully Road a mystical place, a historic location, or a scenic landmark? Not to our knowledge (although friends and partners might suggest that our knowledge is a low bar to clear). But it is a street in Yapeen, Victoria, Australia on which resides a recording studio at which Pop Filter recorded their second release of 2020, and for which the album was named. And after living a bit with Donkey Gully Road, we now find the name quite significant and very memorable, because the album is both.
In our opinion, the album is significant not just because it is one of the better guitar pop albums our ears have experienced this year, but because it is yet another edition of the consistent output of Melbourne's The Ocean Party turned Pop Filter. And it is memorable both because of the quality of the individual songs and the overall coherence of the album. In this case "coherence" is not meant to suggest homogeneity. With six songwriters contributing material there is ample diversity in style and voice. But with their long friendships and extended period as a band, Pop Filter's ability to work each other's music imbues a kinship to the tracks. We think many bands gauge their work to hit a chord with their audience, which is only natural and to be expected. We get a different vibe from Pop Filter. In their case, it is more like a group of friends who get together to kick the ball around and have small-sided games every weekend. You can watch, and it will please them if their play pleases you, but the game is for them -- for their enjoyment and an expression of their friendship. For our part, we're just happy they record their music.
It never seems fair to pick songs for a feature of a recording by Pop Filter (or the predecssor The Ocean Party), because all the songs are worthy and two each reflect he songwriting talents of one of the members. We have taken the approach of highlighting different styles rather than rating songs. We submit that you would do yourself a disservice if you didn't click on the Bandcamp link and listen to the entire album. Donkey Gully Road is out now via Spunk Records, Osborne Again, and Bobo Integral.