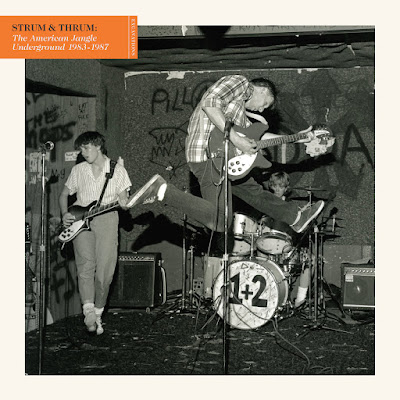 New York label Captured Tracks has launched a new series called Excavations, intended to result in compilations of forgotten music of the period from the '70s through the '90s that reflects -- and inspired -- the type of music on which the label focuses. We think the series is a terrific idea. And we think the label hit a home run with the first release: Strum & Thrum: The American Jangle Underground 1983-1987. Compiling 28 great tunes from the unsung and largely forgotten jangle/college rock bands of the mid-'80s, the record will thrill any jangle pop fan and likely any college rock fan regardless of whether they have actually heard any of these songs before. We consider it an absolute treasure. Without any meaningful production budget of fancy technology, these bands made memorable music by applying the simple basics of good writing, energy, and passion. And they proved that they didn't need anything else.
Strum & Thrum: The American Jangle Underground 1983-1987 is out now in digital and vinyl formats. The 2XCD version sold out, but it is being repressed and can be pre-ordered now.