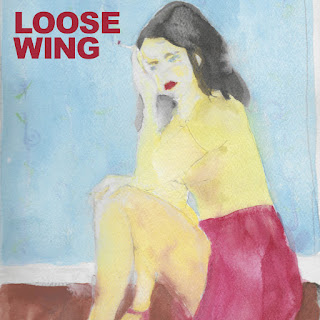 We suppose we could keep Loose Wing as our little Pacific Northwest secret, but that wouldn't be fair to our loyal readers (or the rest of you).  And it most certainly wouldn't be fair to Loose Wing, as the Seattle-based four piece has created a highly accomplished debut album.  Fronted by Claire Tucker, whose superb vocals have the clarity and tone of Neko Case, and the natural ache and nuanced delivery that sells the emotional content, the band has created nine gems of well-crafted, mid-tempo guitar pop.  They play with enough flair to properly decorate the songs, but with enough restraint to avoid showing off their considerable talent.

The lyrical content reflects a keen inner eye and sufficient detachment to tell the story in a relatable fashion.  For us, highlights are "Heather Army", "Learn Your Lines" (Claire's take on learning to play the role to make it in a male dominated industry, we think), "Moving Blankets", and "Wear Me Out".  But there are no weak songs, and while we think the band gels best on the more up-tempo songs, they always deliver.  Then again, Claire could probably sing the dumpling menu at Dough Zone and we'd ask for an encore.

Next weekend we will announce our favorite five or six albums for the first quarter of 2019.  Expect to see Loose Wing on the list.