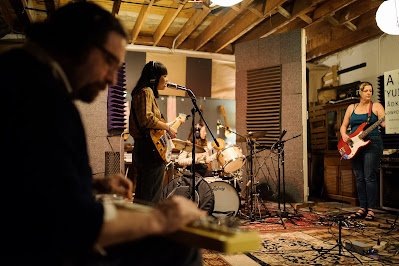 One of my favorite types of posts is a post about a current song obsession. I realize that not every reader will invariably have the same feeling about a song, but I feel better just highlighting a song that moves me. So that brings us to the perfect melancholy jangle of "Back To The Days Of I Don't Knows" by Oakland's Yea-Ming & The Rumours. The song appears on the band's recent LP So, Bird ... and the song was included in our feature of the album three months ago (link). However, a second post for the tune is timely, not just because it has been newly cast in video form (see below), but because there has been a second pressing of the album. Since the first set of vinyl was quickly snapped up, this fortunate circumstance gives those who missed out on vinyl the first time a second chance. And all of us sinners love second chances (I've been known to angle for third and fourth chances, but decline to disclose my success rate).

So don't sleep on this opportunity, folks. This is great, classic songwriting. And if the first pressing sold out, the second pressing may as well. The album is out via Dandy Boy Records in the US and Lilystars Records in the Philippines.

Various links for the album