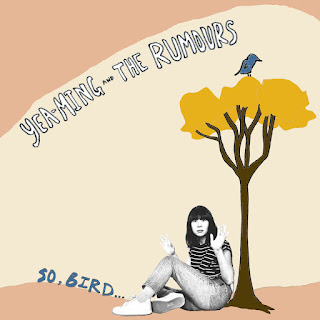 So, what is it about So, Bird..., the new album by Yea-Ming & The Rumors? Although I covered their prior album I wasn't aware that this one was released until last week, yet I now think it is going to be in my rotation for months to come. I can't easily point to a classification that encompasses the whole, but I have no trouble pointing to elements that make this an endearing album. There is a lot of '60s folk rock, with jangle, reverb, a bit of country-rock twang, and catchy sing-along melodies. But there also are songs that seem more akin to modern dreampop or just timeless folk.
Thematically, So, Bird... is remarkable as well. The lyrics are introspective, personal and direct, but not uncomfortably so due to the upbeat arrangements and the lovely vocals by Yea-Ming Chen. This is the sort of songwriting that, if life in the music world was fair, would make legends. After all, it worked for Lee Hazlewood, and we detect some positive similarities with Yea-Ming's songs. As it is, we can only assure you that this album demands your ears, and you won't regret giving in.

Various links for the album