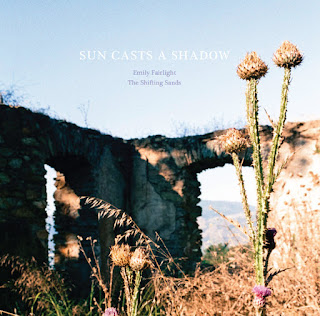 Sun Casts A Shadow sounds like the fruits of a collaboration mandated by the music gods. Two New Zealand artists, Emily Fairlight and Mike McLeod (The Shifting Sands), came together in Los Angeles and spent two days laying down nine tracks of their individual creations. While the styles of their past recordings differ, in the stripped-down approach undertaken for this album Emily and Mike sound like they were made to play on each other's songs.
If you are interested in the artists' past work, McLeod's The Shifting Sands has released collectable psychedelic rock recordings. Fairlight has released several albums, including the remarkable Mother Of Gloom set. Their back catalogs are well worth your time.
Sun Casts A Shadow is available as a 12" vinyl (45 RPM), CD and digital release. It is out now in New Zealand via Fishrider Records and in the UK via Occultation Recordings.