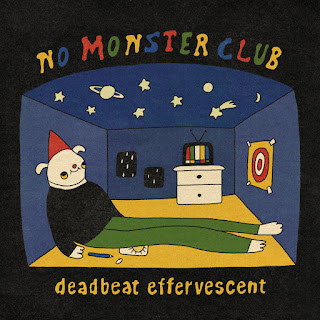 Ireland's Bobby Aherne is a pop savant who entertains in various styles via several different projects. His musical guises over the years include Sir Bobby Jukebox, Popical Island (a collective of multiple talents), and No Monster Club. It is the last of the three that draws our attention today to listen to their recent LP, Deadbeat Effervescent. We must admit that we don't know the reason for "deadbeat" in the album title, but the music more than earns the term "effervescent". But that has been a recurring and appealing attribute of Bobby's music. It is upbeat and full of hooks, often with an almost circus quality. Humor is a common component, as is a variety of instruments and other sonic details, creating a sonic collage that dazzles and surprises the ears without appearing overstuffed.

The songs on Deadbeat Effervescent are classic No Monster Club creations, only tighter (as tight as NMC gets, that is) and seemingly more polished than previous records. They take the listener on an entertaining musical trip the almost leaves one breathless, and we highly recommend it to end your week on a positive note.

On this outing No Monster Club are Bobby, Tim Falcon Prime, and Mark Chester. Deadbeat Effervescent is out now via Emotional Response Records.