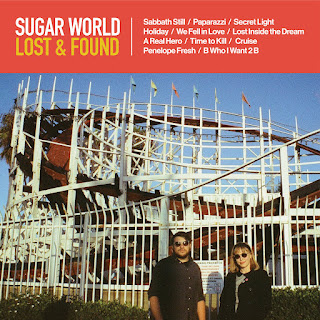 We would expect that a band named Sugar World would create sweet music, and a few spins through their new album Lost & Found confirms our expectations. It isn't that the eleven songs are all sweetness and sunshine, although there is plenty of both. But this album is sweet in that every single track is a delectable pop gem, whether striding the twee side of the street, exploring ramshackle tendencies, dishing a jangling guitar pop anthem, gazing at their shoes like J&MC or whispering a ballad.

Sugar World is Katryn Macko and Ryan Stanley. They write good songs, and have graced this album with seven of their own creations. They also show a keen ear for other artists songs and they have included four cover on Lost & Found, giving them the Sugar World treatment to great effect. Sincere emotion, humor and confidence are evident throughout, making for a superb and pleasingly varied set of music.

Lost & Found is out now in digital, CD and vinyl formats via Sunday Records.