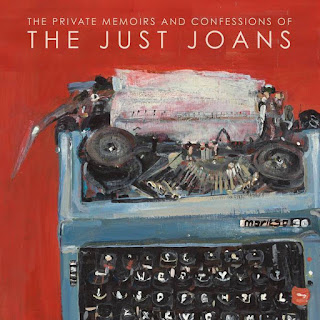 It is rare to read a review of a new recording from Glasgow's The Just Joans without a mention of the fact that they are named for an advice columnist for Scotland's Daily Record newspaper. But we aren't going to fall into that trap. No sir, we are too clever for that. So we will jump right into the important stuff: The Just Joans have a new album titled The Private Memoirs and Confessions of the Just Joans. As knowledgeable  fans would expect, the songs are filled with tales of non-love, disintegrating relationships, casual violence, gender battles, annoying acquaintances and wry observations on our fellow men and women. The lyrics are sardonic, humorous, self-deprecating, bittersweet, and eminently clever.

We are reminded of the joys that will be revealed every time we receive a recording from this band just by reading the titles of the songs. For example, this outing brings us "Hey No, Let's Not Go", "Who Does Susan Think She Is?", "My Undying Love For You Is Beginning to Die",  "The One I Loathe The Least", and "Another Doomed Relationship".   But the titles are just the appetizers, as The Just Joans never fail to deliver on the promise of a clever title. They entertain, they make you laugh, and they poke fun. But ultimately, their work is full of humanity and makes us happier to be alive.