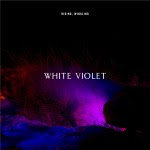 Athens, GA country rockers White Violet have released their first album, but it's been in the works for quite a while. Hiding, Mingling has a sad, quiet vibe to it, but with some sweet-sounding vocals that are kind of reminiscent of Whiskeytown. White Violet consists of Athens native and young music veteran Nate Nelson (who has released two solo albums already, the first when he was 16), and Vaughan Lamb, Brad Elliott and Josh McCauley. But on this record, his most frequent collaborators are Jeremy Wheatley on drums, David Barbe on bass and Matt Nelson on electric guitar. Producer was Andy LeMaster, of Now It's Overhead.

It's an extremely intimate record. Nelson's voice is laden with emotion and affect, and on the quieter tracks, you can hear fingers moving up and down the acoustic guitar strings. But on some of the tracks, the rhythm section gets to chugging along, and the contrast is part of the appeal. It's good acoustic country, with rock and folk touches throughout. 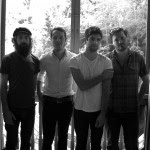 Here's a video of them from SXSW, playing "4AM":

You can stream the record at Spinner - click here.

The record is out Tuesday (August 14) on Normaltown Records, a new imprint of Americana stalwart New West Records.