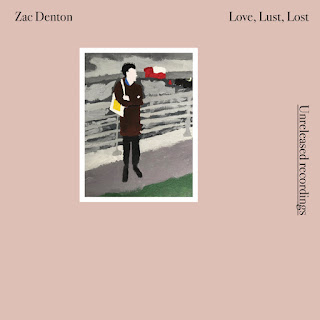 Zac Denton created a plentitude of memorable music in his 24 years. He was a songwriter and performer in excellent projects The Ocean Party, Ciggie Witch, Hobby Farm, No Local, Cool Sounds and Pregnancy. And that music stands as an enduring tribute to his talent, but also a reminder of his friendship and spirit to those who knew and loved him. We never met him, just having seen him perform with The Ocean Party at the Victory Lounge in Seattle a few years ago. But the care for his memory and music evinced by those left behind after his tragic death from a sudden illness at age 24 speak loudly for the kind of man he was. His brother and bandmate, Lachlan Denton, and other friends now have assembled a new collection of Zac's creations, consisting of 15 demos, outtakes, alternative versions and live performances. Aptly titled Love, Lust, Lost, it is a testament to the man's creativity and keen sense of musical expression, as well as his impact on those who knew him. Not surprisingly, the songs were minimally presented at this point, likely to be expanded and decorated if rerecorded for release. As such, what role does Love, Lust, Lost play in Zac Denton's discography? It seems to us that the album adds depth to understanding Zac's creative process, revealing the initial stages of creation. But that, admittedly geeky, attribute aside, for us it simply is a wonderful and intimate set of songs that rarely can be experienced and enjoyed in such a raw and unselfconscious stage.

Love, Lust, Lost, which will be released with Zak's first Hobby Farm (solo) album, Braeside, as a double gatefold via Spunk Records/Osborne Again (Aus/NZ), Emotional Response Records (US), and Lost and Lonesome (EU). The release date was August 26 -- Zac's Birthday.