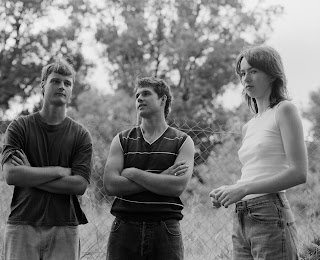 "Bit Much" isn't just a song, it is an explosion -- a white hot, chest pummeling blast of punk/garage rock. It is the first single from the upcoming second album Care by Melbourne power trio Clamm, and if the rest of the record follows suit, it will contend for the heavy release of the summer.

Clamm are Jack Summers (guitar/vocals), Miles Harding (drums/backing vocals), and Maisie Everett (bass/backing vocals). Care will be released August 19 via Meat Machine in UK, Europe and Asia, and by Chapter Music everywhere else. Clamm will be touring the UK and Europe in late August and early September.