"Hello, Alright, You Got That?" by Cool Sounds

Music from Cool Sounds is the most versatile and durable feel good material available. There is none of the jitters like after drinking a second flat white right after the first. And no hangover like after one or more pints past our limit. You can just keep playing them and vibing to the, well, cool sounds. So when we learned that Cool Sounds has a new song, we didn't delay in playing it. And we have played it quite a bit today.

"Hello, Alright, You Got That?" is the first single from the upcoming LP, Like That. This edition of the project marks a change for the project in that Dainis Lacey does most of the playing, as well as the singing and writing -- albeit with some contributions from Pierce Morton, Dylan Young and Ambrin Hasnain. We are advised to anticipate a bit of glam added to the Cool Sounds sound as well, so it will be an adventure. And speaking of adventure, check out the video for "Hello, Alright, You Got That?" It appears to be Dainis and Ambrin relaxing at home with a pool guy in the background, but things aren't quite what they seem. Oh, and we want the 'pool guy's' shirt. Very much.

Like That will be out in October 7 via Chapter Music. 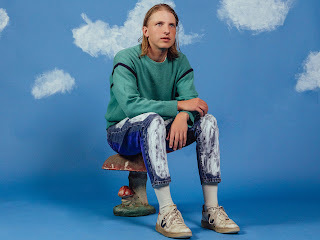