Even As We Speak - Adelphi 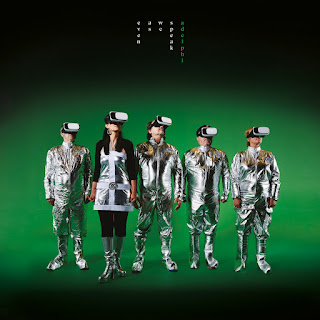 Australian band Even As We Speak attracted a well-deserved following in the '80s, including Mr. John Peel, and even found an apt platform in Sarah Records for their debut LP, Feral Pop Frenzy. They dissolved in the early '90s, looking destined to be one of those wonderful '80s fuzzy pop bands that burned bright and then left fans forever hunting for rare physical artifacts of their art. But Even As We Speak is the rare band that can not only mount a resurrection, but a resurrection that encompasses a broader sound and more nuanced and (understandably) experienced perspective. So after a reunion and the Black Forest EP in 2016, the five-piece has created Adelphi, the band's second LP.

The album, quite simply, is musical magic. Everything the band did well before, they still do as well or better, so the melodies are delectable and perfectly illustrated by the players. But they also deepen and expand the aural landscape with synths, and the emotional landscape with an appreciation of the loves, losses, and day to day challenges of life heading into middle age (nice to know we aren't alone, isn't it?). And Mary Wyer's vocals continue to be a treasure of the indie pop world. We couldn't pick our three favorite songs on the album if we tried, so we didn't try. Instead we picked three songs that illustrate some of the many facets of the songcraft on Adelphi. If you buy any music this year -- and of course you will -- this album should be on your list.

Even As We Speak are Matthew Love, Mary Wyer, Julian Knowles, Rob Irwin, and Anita Rayner. Adelphi is out now in vinyl, CD, and digital formats via Shelflife Records (US) and Discos de Kirlian (Spain).