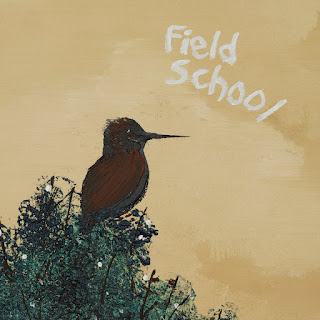 At times like this we wish that we had purchased the deluxe box of superlatives because the subject of this feature certainly is worthy. Charles Bert, vocalist and rhythm guitarist of Math & Physics Club, refused to let the isolation of the pandemic prevent him from creating music. He began his solo project Field School and released a couple of EPs on a small label started by a friend. But quality has a way of finding a broader audience, and Charles' debut LP When Summer Comes is now available via Spanish label Bobo Integral. For fans of the sweet and bittersweet tunes of Math & Physics Club, and more generally for fans of jangling indie pop, the album is everything we could wish for and more.

The DIY ethos of hometown legends K Records seems to come naturally to Charles. But his musical feet remain firmly planted in the jangle and twee channel of Sarah Records, as well as numerous labelmates at Bobo Integral. What elevates the songs on When Summer Comes above others in that category, however, are the incisive writing and sincere performances. The listener can feel the joy and the melancholy, and enjoy the self-effacing humor. And even the more melancholy tunes benefit from Charles' relatively light touch, leaving the listener with a warm feeling and an understandable desire to hit "replay". This certainly is one of the jangle pop albums of the year.

When Summer Comes is out now in digital and vinyl formats.

Bandcamp for When Summer Comes