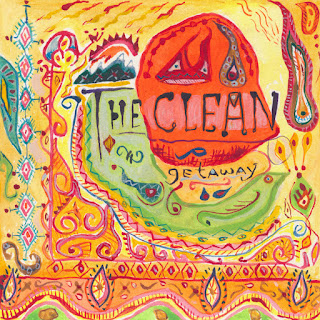 One of the most enduring of the southern hemisphere indie rocker bands are New Zealand's The Clean.  Perhaps one of the reasons for their longevity is that they are not The Clean 24/7.  Brothers David and Hamish Kilgour have other projects, and Robert Scott has The Bats and his solo work as well.  So the members live their lives and get together from time to time to be The Clean.  The trio hasn't graced us with an album of new material since Mr. Pop in the latter half of the '00s, but Merge Records is stepping in to fill our need for more material.  In this case, the label has taken the band's 2001 album Getaway, which was a CD-only release, and reissued it in vinyl form.

And to call it a reissue really doesn't do it justice.  The package is a two-LP/2-CD release (also available in digital form) with the original album plus live recordings of songs from two rare records (Slush Fund and Syd's Pink Wiring System) which had only been released in New Zealand.  The songs are remastered to great effect, which always draws listeners.  But for me the magic is the breadth of the band's sweet spot.  Of course the collection contains the jangling, scrappy type of songs one would expect from a Dunedin outfit.  But their are delicious folk tinged songs, psychedelic tapestries, satisfying instrumentals, and a few country rock tunes.  And the second disc serves to remind all of us why The Clean is such a popular live band.

So even if you are a fan and, like all of us here at WYMA, already owned Getaway, there are compelling reasons to grab this reissue (check out "Do Your Thing" below for one stellar example); and note that the vinyl comes with a digital download code.  If you don't have Getaway, this is your chance to get a great album with timeless guitar pop at an attractive price.  And if you are keeping score, this is one of the best reissues of 2016.