No Monster Club - People Are Weird 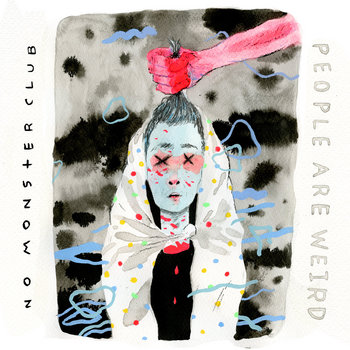 On People Are Weird, Dublin's No Monster Club offers a collection of exuberant, at times off kilter, pop tunes that meander, jump around and delight in rather breathless fashion.  At its most straightforward, the album delivers perfect pop tunes, but at other times the listener may wonder whether he or she has stumbled onto a guerrilla street theater production.  Fortunately, it does not matter because the songs crafted by frontman Bobby Aherne and his mates delight in either case.  The songs are joyful, woozy, lo-fi and almost always up-tempo.  And the band is happy to have the listener wired into the fun, as is clear beginning with the opening track "Can't Get Enough of That Hippy Dippy Bullshit".

Some of most accessible songs are on the latter half of the album, such as "A Bad Example", "Post Life Safari" and "The Loneliest Master", a three song stretch that made it clear that Aherne is a pop master, albeit one with subversive tendencies.  But I can't call the album back-loaded because the first five tracks have a scruffy charm and incredible and rare energy.  The bottom line here is that this album is both good humored and sinfully good.


People Are Weird is out today via Mirror Universe and Popical Island.  Getting a digital copy is as easy as hitting the Bandcamp link below.