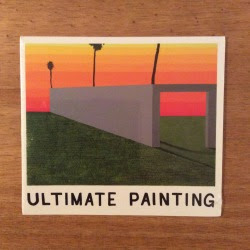 With today's post, James Hoare has been featured on WYMA with three different bands.  He is the lead guitarist for Veronica Falls, one of my favorite bands of the past few years (their latest album was number six on my2013 list ).  Earlier this year James and Max Claps released an excellent self-titled album from their project Proper Ornaments (review here).  Now James has teamed with Jack Cooper of UK band Mazes to form Ultimate Painting.  Apparently James and Jack became friends when Mazes and Veronica Falls toured together.  They took their name from a work of art from the '60s Colorado artists' community known as Drop City.

If you like either of James' other bands or Jack's Mazes, you likely be curious to see what the boys have created in this collaboration.  But my advice to all fans of guitar pop is to check out this album. Each musician contributed five songs, and you'll hear hints of their other projects But for my ears there is a good bit of The Feelies, The Bats and even a bit of The dB's, early R.E.M and The Velvet Underground.  With intertwined guitars the hooks are frequent, like a Cracker Jack box with as many prizes as kernels of candy-coated popcorn and peanuts, while the bass and drums provide a sturdy backbone to the melodies.  The set includes slower-tempo tracks and tracks with quicker tempos.  I personally connect more with the latter, particularly "Central Park Blues", "Rolling in the Deep End", "Jane" and "Ten Street" (stream below).  But the more languid tracks are packed with charm, as the title track (stream below) ably demonstrates.  And all of the songs work together like the elements of a painting.  Some are bolder and demand attention, while some perform a supporting, but critical role.

One final note is that this album is a "grower"  -- I liked it the first time I heard it, but I like it better each time I play it.  James and Jack compliment each other bring out the best in each other.  I hope the collaboration continues.  And I hope you get yourself an Ultimate Painting to adorn your life.

Ultimate Painting is out now in vinyl and CD formats via Trouble In Mind Records.