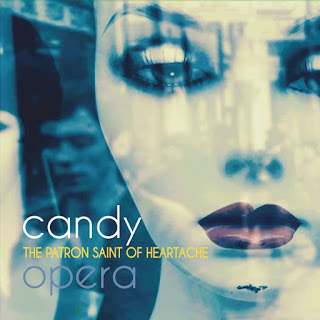 We like the name of the band - Candy Opera, and we like the title of the album - The Patron Saint of Heartache. But that doesn't get a band digital ink. What does get a band digital ink is a fine set of songs, and this album fully delivers on the quality scale. Add the fact that the album marks the new chapter of a feel-good resurrection story, and we find ourselves cheering for this lot.

The short version of the background is that Candy Opera were a promising Liverpool band formed in the early '80s, drawing favorable comparisons to Scotland's Aztec Camera and fellow Liverpudians Echo & the Bunnymen and Pale Fountains. The band went through various lineup changes until they pulled the plug in the early '90s. The story may well have ended there, but Firestation Records found the band's old demos and released them in 2018 via an LP titled 45 Revolutions Per Minute. Candy Opera reformed to support the release, and found their creative juices jump-started. The result is The Patron Saint of Heartache, their first new songs in thirty years. The music is spacious, detailed and big-hearted. It is no surprise that the band's '80s guitar pop sensibilities are evident, but it also isn't a weakness. In our view these songs demonstrate both why Candy Opera was well-regarded in the '80s and why they deserve a play in current day guitar pop.

Bandcamp for The Patron Saint of Heartache