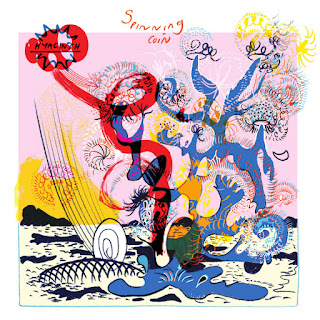 It won't surprise regular readers to learn that we eagerly dove into Hyacinth, the new LP by Spinning Coin. The Glasgow four-piece (well, half of them now reside in Berlin, to be honest) have long been favorites here. But we can confidently state that the delights to be found in the album are accessible to anyone with ears, not just the confirmed fans. Named for a tragically doomed lover of Apollo in Greek mythology, Hyacinth contains a generous 14 tracks of spirited, sometimes biting, but ultimately hopeful art pop. Shared songwriting and vocal duties result in varied and interesting perspectives. The music is dynamic and the production values high, with psychedelic touches balanced by sparkling arrangements. Three previous singles from the album -- "Feel You More Than World Right Now", "Ghosting", and "Get High" -- are stellar songs and well-chosen to prepare the world for the album. However, what often separates a great album from a merely good album is the quality of the tier of songs not chosen as singles. And since we previously shared two of the singles (here and here), we will demonstrate our point below with streams of our next favorite tracks.

Spinning Coin are Chris White, Jack Mellin, Sean Armstrong, and Rachel Taylor. Hyacinth is out now in digital, vinyl and CD formats on the Geographic imprint of Domino Records.