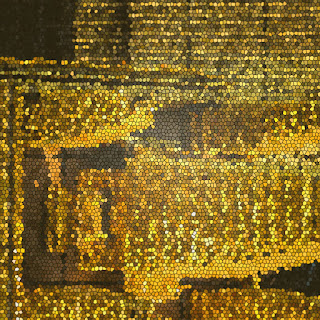 It probably takes a good bit of confidence to write a batch of songs, and name the collection Struck Gold while recording them. But Neil Jarvis did just that for the second album by his project Sprinters. So we have Neil's opinion about the songs that his Manchester-based band has created, and now the listeners can weigh in. After living with this album for a few weeks, our verdict is: Sprinters have struck gold.

As the daylight hours become shorter, the skies grayer, and the rain more frequent, one thing we have been able to count on is the feeling of hazy sunshine on our shoulders and a good dose of serotonin every time we listen to this album. The title track opens the proceedings with a strutting riff borrowed from "Brimful of Asha", and then unspools down a trail of guitar pop and surf with a wash of melancholy for added depth. We previously featured single "3s & 4s" (link), a true showcase song. But we don't need to repeat it here because there are so many highlights in this ten-track set. For example, we are completely spellbound by "The Light", a slow tempo wash of liquid gold the infuses us with the same wonderful feelings that we heard the first time we heard late '60s AM hit "Grazing In The Grass" by Friends Of Distinction (despite the two songs having little in common other than a 100 percent feelgood factor), although we could understand others drawing a more direct line to The Rascals' "Groovin On A Sunday Afternoon". "Undone" features ringing shoegaze. "Demolition" slays us with a beautiful guitar line and a palpable melancholy. Currently, our most repeated song is "It's Gone". If you are a fan of guitar pop, this album is a 'must' addition to your musical library.

Struck Gold is out today via Meritorio Records.