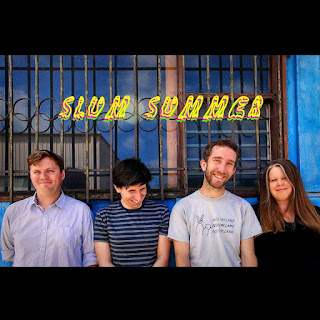 Here we are in the early stages of winter, and listening to music by a band named Slum Summer.  I don't even know what that name means, but I do know that summer is not what came to mind when I exited the house and 29 degrees Fahrenheit this morning.  We should cut the band some slack, however. They are based in balmy San Diego and headed by a UK transplant who probably is quite happy to have found forever summer.   ABABO, the gang's debut album comes next month via Jigsaw Records, but you can catch an aural taster called "Trampoline" below.  Solid musicianship and an offhand, storytelling style makes this band an appealing newcomer for us.