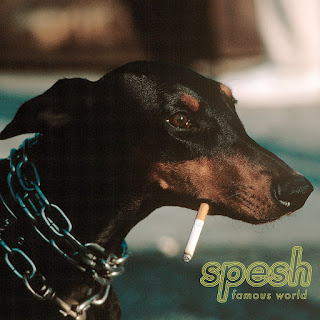 Yes, this album art is one of our favorites of the year (allegedly snapped in NYC's Washington Square Park in the '80s), but Famous World is not here because of the album art.  It is here because we love the music.  The artist is Spesh, a Seattle foursome founded by vocalist Michael McKinney and guitarist Sergio Mirazo from the ashes of Boyfriends, and rounded out with Morgan Dixon (drums) and Brian Yeager (bass).  The ten songs on the album reflect a number of influences, most of them British and most of them from the '80s and '90s.  But that is not meant as criticism, as these guys deliver the big beats, jangling guitars and synthy melodies that made Manchester the epicenter of the rock world for a number of years.  The sound is tight, the production is clear, and the songs evoke some of our favorite musical memories.  This album is on daily play around headquarters.

Famous World is out now in vinyl and digital formats via Killroom Records, a Seattle label formed by Troy Nelson (of KEXP) and Ben Jenkins.  And a shout out to Ben for the production/engineering work on the album.