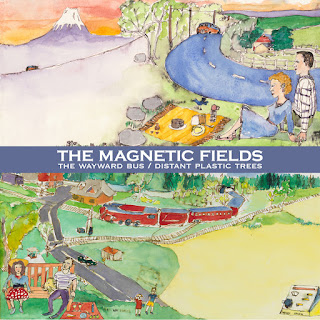 If you appreciate songwriting as an art, Stephin Merritt should be a familiar to you.  His work is available under his own name, and four different bands including The Magnetic Fields.  Of course, his best known work under that band name was the multi-disc 69 Love Songs, which was released by Merge Records in 1999.  But to focus on that one, admittedly transcendent, release to the exclusion of others is to deny yourself a wealth of inventive, clever and incredibly satisfying pop music.  Cases in point are his first two The Magnetic Fields albums, The Wayward Bus and Distant Plastic Trees, which were released in the early '90s.   While those indie releases initially didn't attract a wide audience, they received a bump in 1994 when Merge Records released them as a double album.  The records showcase the signature Merritt art -- wistful and caustic, clever and direct, sad and humorous, retro but somehow timeless.  And always melodic.  The records were a breath of fresh air in an industry awash in grunge, alt rock and Britpop.  The listener will hear hints of Phil Spector and Brian Wilson, and more broadly Baroque pop over the decades.  But there should be no compulsion to categorize, this is classic pop that deserves a place in your collection.